The most common cardiac arrhythmia is atrial fibrillation (AF). One in four will get it in the course of their life, the probability increases especially from the age of 65, as well as from 55 years with the presence of other risk factors (e.g. high blood pressure, diabetes, previous cardiovascular events) [1]. AF is one of the major causes of stroke, heart failure, sudden death and cardiovascular morbidity, and is associated with poor quality of life and averse symptoms. However, Cardiac arrhythmias are not always noticeable, often occur only occasionally and are therefore sometimes difficult to detect in the doctor’s office (e.g. by means of an ECG) [2]. In many patients, AF progresses from short, infrequent episodes to longer and more frequent attacks. Over time, many patients will develop sustained forms of AF.

Every year, millions of patients experience symptoms potentially associated with cardiac arrhythmias, a condition in which the electrical impulses that coordinate heartbeats do not occur properly, causing the heart to beat too quickly, too slowly or irregularly. Examples of arrhythmias include supra ventricular arrhythmias, which are fast heart rates that originate from the upper chambers of the heart, atrial tachycardia, atrial flutter and AF. The symptoms of arrhythmias include palpitations or a skipped heartbeat, rapid heartbeat, shortness of breath, dizziness, light-headedness, fainting spells, vertigo, anxiety and fatigue or no symptoms at all. Early detection is essential in order to obtain early treatment and help avoid more serious medical conditions, such as stroke, and additional medical costs.

AF causes high risk of stroke [3]. Stroke is a major disease that affects the ability of blood vessels to carry oxygen to the brain due to clotting and ruptures. According to the d European Society of Cardiology, strokes are globally the second- leading cause of death and the leading cause of complex disability in adults. In Europe, estimates predict that over the next 15 years we will see an increase of 35% of stroke cases due to larger ageing populations. While death rates have been in decline, the costs of caring for stroke survivors is rising due the average lifespan rates rising [4].

There are two major risk factors of stroke: Hypertension or high blood pressure, and undetected atrial fibrillation, or AF. Approximately one-third of all stroke cases are linked to complications from atrial fibrillation. Atrial fibrillation is not a permanent condition, it comes and goes, and in 50% of the cases you don’t feel anything, and in some cases you only have some accelerated heart rhythm. Due to this unpredictability, it’s highly difficult to diagnose on time.

In patients with AF, the upper chambers of the heartbeat irregularly and blood does not flow properly to the lower chambers of the heart. The AHA estimates that AF affects as many as six million patients in the United States and 33.5 million patients worldwide. The NSA estimates that one-third of AF patients are asymptomatic and still undiagnosed. More than 750,000 hospitalizations occur each year because of AF, and the condition contributes to an estimated 130,000 deaths each year [5]. Since AF is more common among people over the age of 60, these numbers are expected to increase as the U.S. population ages.

In addition, AF is the leading risk factor for stroke because AF can cause blood to collect in the heart and potentially form a clot, which can travel to the brain potentially resulting in an ischemic stroke. While individuals with AF are approximately five times more likely to suffer a stroke, the NSA estimates that up to 80% of strokes in people with AF can be prevented through early detection and proper treatment. According to the AHA, stroke costs the United States an estimated $34 billion each year in healthcare costs and lost productivity, and is a leading cause of serious long-term disability. The AHA estimates that ischemic strokes represent 87% of all strokes in the United States and that between 15% and 20% of the estimated 690,000 ischemic strokes are attributable to AF [6].

Yet there is hope, because when atrial fibrillation is diagnosed it can be very effectively treated by using anti-coagulant drugs, which thin the blood and prevent the creation of blood clots. Up to 80% of these strokes are avoidable with early and efficient detection.

Atrial fibrillation burden, the amount of time a patient spends in AF during a monitoring period, has been identified in the clinical community as an important measure for determining appropriate and effective therapeutic interventions to manage patients with AF and assessing stroke risk. The calculated AF burden is dependent on data available for analysis during the monitoring period. Since the most common type of AF occurs intermittently, long-term continuous patch-based monitoring more accurately measures AF burden because every heartbeat is recorded without interruption during the entire monitoring period. Corsano currently sponsors two AF Burden clinical trials, one in Amsterdam Medical center in collaboration with Cardiology Centra Netherlands and one at Basel University Hospital.

A study to determine the correlation between AF burden and the risk of stroke in patients was published in JAMA Cardiology in May 2018 [7]. Using this data in combination with electronic health record data from 1,965 patients at two large integrated health care delivery systems, the researchers concluded that an increase in the burden of AF is independently associated with a higher risk of ischemic stroke and arterial thromboembolism (“TE”) in patients who are not taking anticoagulant medication. An AF burden of 11.4% or higher was associated with more than three-fold increased risk for stroke or TE event after adjusting for either CHA2DS2-VASc or ATRIA scores, two tools physicians use to assess stroke risk. 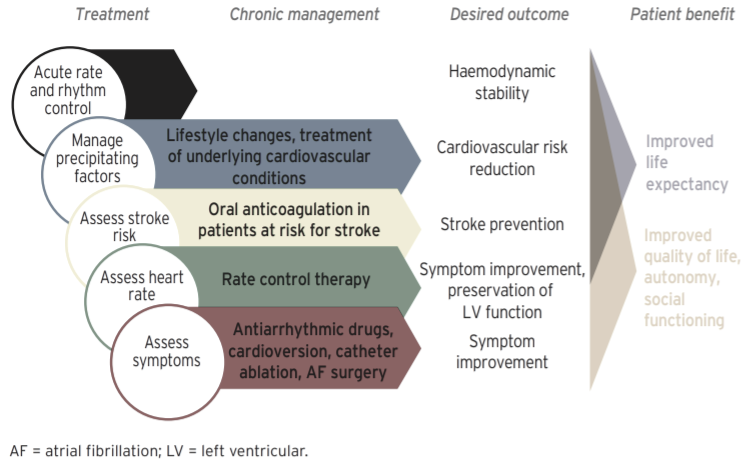 We are currently performing pilots with selected clients. Contact us if you want to know more!